30 years of struggle in the Niger Delta

In January 2021, in a Dutch courtroom, an enormous breakthrough was achieved for all the people of the Niger Delta, who have suffered many decades of destructive pollution of their environment. The ruling of the Dutch judge in the legal proceedings brought against Shell by four Nigerian farmers and Dutch environmental organisation Milieudefensie is the first time that a Dutch court has called on the oil giant’s mother company to take responsibility for the consequences of its activities outside the Netherlands. The judge recognised the suffering of the four farmers and their families and communities, giving them the real prospect of compensation. The ruling, the outcome of thirteen years of legal proceedings, is also important for many other people who bear the impact of investments and activities by companies with their head offices registered in the Netherlands. The case shows that multinationals registered in the Netherlands must take responsibility for the decisions taken by their subsidiaries.

This case, entirely the initiative of the Nigerian plaintiffs and Milieudefensie, is the result of three decades of suffering, work and frustration. It has put the problem back on the agenda.

This struggle of the local people, the Ogoni, against Shell has actually been going on since 1990, when the they protested against pollution caused by oil extraction and activist Ken Saro-Wiwa set up the Movement for the Survival of the Ogoni People (MOSOP). In 1995, the protests in Nigeria became world news when Saro-Wiwa and eight other activists were executed by hanging. Saro-Wiwa and others who had fought the pollution from their villages knew better than anyone that they could expect no help from their own government. So they conducted their campaign by challenging international companies like Shell to take on their responsibilities. The executions were the sad cause of a wave of international attention for the Niger Delta. Nigerian activists and the international environmental movement took the opportunity with both hands to create an international stage for their cause. Within the environmental movement, it soon became clear that the situation in Nigeria was also causing concern in other countries.

At that time, Both ENDS had just been set up to strengthen the environmental movement in the South. In response to the horrors in Nigeria, Both ENDS started a campaign together with Milieudefensie and IUCN-NL to draw attention to the work of the Nigerian activists, partly by supporting the ‘Lawyers on the defense team for the Ogoni leader Ken Saro Wiwa’, Oronto Douglas and Uche Onyeagucha. In England and the Netherlands, they called for attention for the disaster that had taken place in their villages. In 1996, together with activists from other countries who were dealing with similar disasters, we set up the international Oilwatch network to get this problem on the radar of companies, governments and financiers. 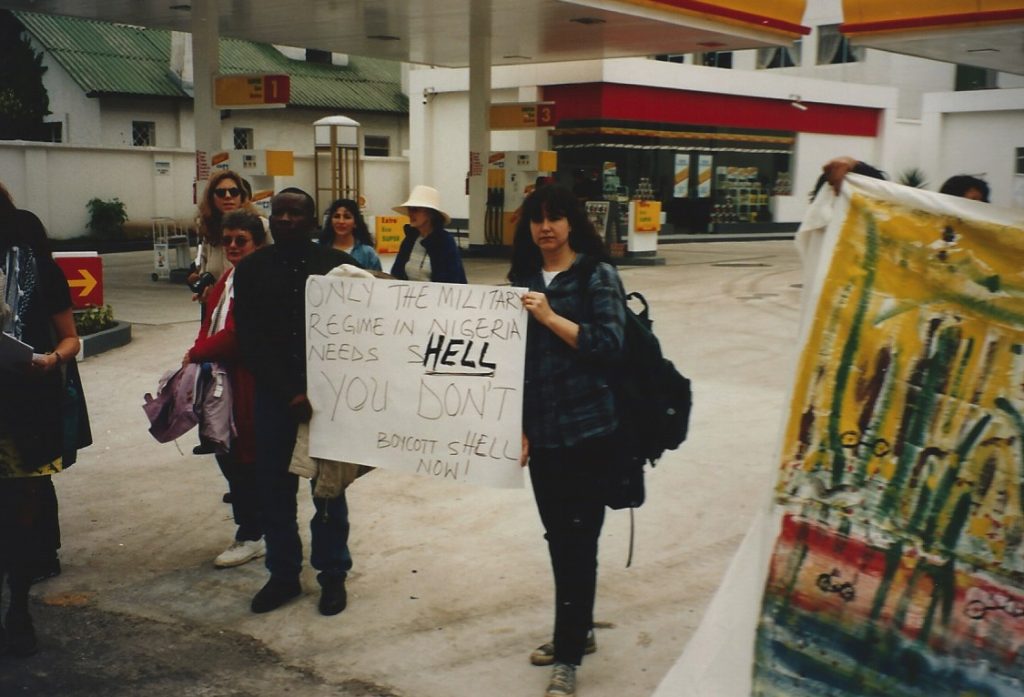 Protest in Quito in 1996, when Oilwatch was established in Ecuador. With Both ENDS-employee Tamara Mohr on the right. 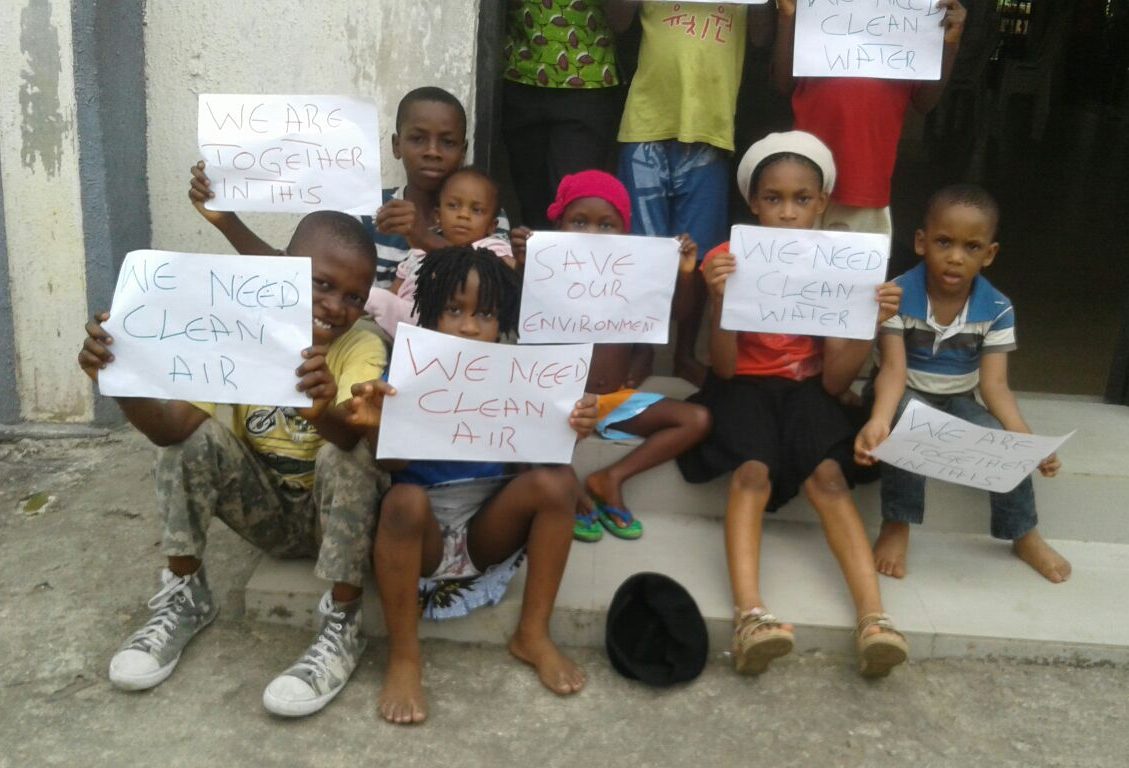 Children in the Niger Delta demand clean air and water

Besides the legal proceedings, the Nigerians fighting for justice have since the very beginning called for investors to stop investing in oil companies. “They drill and they kill!” said Oronto during a visit to the US. He appealed to people to invest with their hearts and minds. The divestment movement has only really gained momentum in the past decade or so. In the Netherlands, too, the call for fossil-free pension funds is increasingly loud and the climate movement is asking the government to stop funding the fossil industry. The Paris Agreement is also very clear on this issue; one of its three main goals is to make financial flows fossil-free. It really matters where we invest our money and what we spend our taxpayers’ money on.

In the meantime, the pollution of the Niger Delta continues. Both ENDS remains involved in the local people’s struggle against the consequences of oil extraction. For a number of years, we have also been working mainly together with women’s groups. Women are hit hardest by the scarcity of water and food and by health problems (e.g. miscarriages and ovarian cancer) caused by the pollution. This is because the traditional gender division of labour places the responsibility of household water management on women, and they also manage many family gardens. Yet their voices are not taken into account when addressing solutions. Community women often do not have the opportunities to participate and speak in International Forums and platforms, to engage with governments and corporations and to speak though advocacy platforms and media. 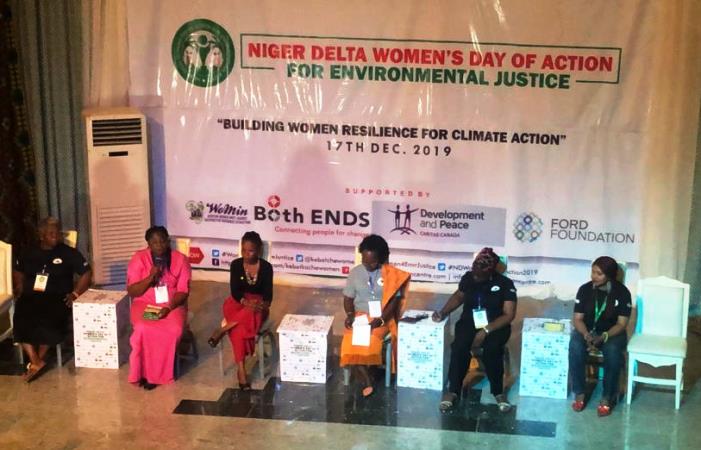 Every year on December 19th, local womens groups organise the Niger Delta Womens Day of Action for Environmental Justice. This is a panel at the 2019 event. 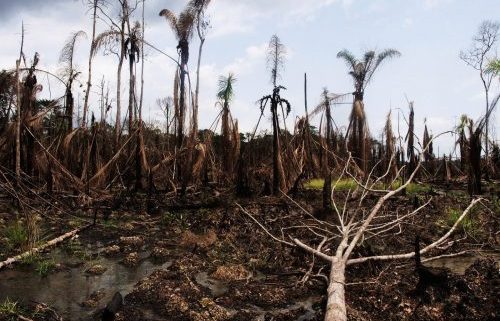 Oil spills have severely damaged the environment of the Niger Delta. Clean up is progressing only slowly. Photo by Sosialistisk Ungdom on Flickr

Within the Global Alliance for Green and Gender Action, women’s organisations from Port Harcourt and Ogoniland are campaigning and raising their voices to demand a thorough clean-up of the Delta, and an end to gas flaring. In 2020, decades after the fight against Shell began, a representative of local communities spoke at Shell’s Annual Shareholder Meeting. Members of the women’s organisations are also in dialogue with Dutch pension funds to share their concerns about their continued investments in Shell, thus echoing the call of lawyer Oronto in the 1990 to divest.

From local to global

The history of the Niger Delta shows what Both ENDS’s work is all about: connecting local struggles to larger systems, multiplying local messages to global audiences, and connecting those local activists to the international decision-making platforms where they deserve a seat at the table. That is what Both ENDS did in the 1990s, it is what we do now and what we will keep on doing as long as it is necessary.