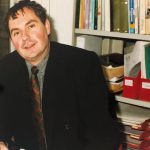 Theo at work in the Both ENDS office around 1992. © Theo van Koolwijk

Theo van Koolwijk coordinated the IUCN project that became Both ENDS. He was the organisation’s first Director, a position he held from 1991-1998. During his tenure, Daniëlle Hirsch became involved with Both ENDS as a volunteer and consultant. In 2003 she became policy advisor on water management. Since 2008 she has served as Director.

Theo, you were with Both ENDS from the beginning, when it started as a project. How were you involved and what inspired the project?

Theo: In the years prior to the founding of Both ENDS, I had been working on a series of projects aimed at curbing trade in endangered species. I had been asked by the Dutch government to advise them about which species to propose for inclusion under CITES, the UN Convention on International Trade in Endangered Species of Wild Fauna and Flora. I corresponded with many NGO people and scientists around the globe to provide input to the scientific working group, which decided on a list of about 30 species to propose.

I did the project under the auspices of the Wildlife Trade Monitoring Network, which was led by IUCN and WWF, so I was sitting at the IUCN-NL office at the time. There were three parallel studies being done by IUCN at the time, all of which entailed making contact with NGOs around the world. This was back in the days when contact meant mailing letters back and forth. We realised that with these different projects we were building a network of environmental organisations in developing countries.

There was growing awareness about the importance of sustainable development. Joke Waller-Hunter was an important advocate in the Ministry of Environment at the time and saw the importance of supporting environmental NGOs in developing countries, but didn’t have the resources. Meanwhile, the Ministry of Development Cooperation had the resources, but didn’t yet see the importance. They had just one person with an environmental focus, someone working on forestry. All development aid was channelled to the big four development organisations, Novib, Cordaid [then known as Cebemo], ICCO and Hivos. These organisations were aimed at poverty reduction and considered environmental protection a luxury that would come after food, water, safety and shelter were provided. They were not eager to change that approach.

So Both ENDS started as a new project within IUCN-NL, with a budget of some 70,000 guilders. The idea was to create a focal point for environmental organisations in developing countries. It was 1987, the same year of the Brundtland Report, which really solidified the whole concept of sustainable development. And then in 1990 the Both ENDS foundation was established.

What was behind the decision to become an independent organisation?

I think there was some sense within the IUCN constituency that we were not focused enough on conservation and nature. We were also growing.

What did the organisation aim to do?

Theo: The ‘ENDS’ in the name stands for Environment and Development Service. We saw that environmental NGOs needed money, contacts and exposure. We wanted to support them, but we didn’t want to be a donor, to handle money. We wanted relationships based on equality, sharing and learning. We knew we needed to learn from each other. We also knew that development policy needed to change, that barriers – specifically those related to economies and lifestyles – needed to be removed.

Daniëlle: What you describe is both new and familiar. It strikes me that Both ENDS is very consistent as an organisation. Everything around us has changed and how we present ourselves externally has changed. But the things you mention as the core values of the organisation – equality, the mutual need to learn and to influence policymakers and donors – these are still the core of what we do. I couldn’t say it more succinctly.

What were some of the highlights of the early years?

Theo: We built a very impressive international network. We had a lot of successes and results in service delivery to hundreds of organisations. We engaged in successful awareness-raising and agenda-setting about the social and environmental impact of dams, forestry and food production. These were some of the most striking effects of our work back then.

We put a lot of energy into organising and bringing our partners to international conferences. It was the time before internet and it was through such conferences that you got to know people. There were something like 20-30 each year. In the run-up to the Earth Summit in Rio in 1992, there were a number of important preparatory NGO conferences. There was an NGO Conference in Paris, initiated by President Mitterrand. It involved some 1,000 NGOs and the Working Group on Poverty and Affluence came out of it, and continued until well after the Rio conference. The group was co-hosted by Both ENDS and the Canadian Council for International Cooperation. There was the Fate and Hope of the World Conference in Nicaragua (see picture below).

Our financing depended a lot on commissioned work which contributed to bringing people together and building the knowledge base. Both ENDS is an idealistic organisation. But in order to be effective and efficient, I felt it should be organised as a service organisation, so it is clear for whom we are intervening and who is paying for the intervention. For instance, the Ministry of the Environment commissioned a feasibility study of a Dutch-Indian NGO fund, which entailed a lot of outreach to Indian organisations. The Ministry of Development Cooperation gave us some 80,000 guilders to bring a delegation of Indigenous People’s organisations to Rio (see picture below). They gave us another pot of money to bring African NGOs to Nicaragua.

Another highlight was our involvement in the Vision from the South and Balancing the Future projects, which were supported by the embassies and the Ministry of Foreign Affairs. There was a very progressive policy back then. The Minister, Jan Pronk, putting a team of young civil servants to the task of helping develop Dutch foreign policy. The idea was to bring together the Netherlands Costa Rica, Benin and Bhutan, all countries of a comparable size, to jointly develop sustainability agreements based on equality, reciprocity and sustainability.

Daniëlle: It’s interesting to be reminded of that project now, when everyone is talking about shifting the power to the South. The sustainability agreements ultimately failed because many actors on the Dutch side were made uncomfortable by the observations and recommendations. It might be an interesting idea to see if we could get them back. It might be a blueprint for opening up a much-needed conversation.

It’s also an example of another thing that we’ve consistently done: Both ENDS has always pushed an agenda by identifying allies within organisational structures. We achieve what we achieve because there are always people in relevant Ministries and international organisations that are open to a conversation, and willing to stick out their necks by opening up discussions internally. Likewise, it has been important that management within these same institutions have been willing to reward those that call for innovation. 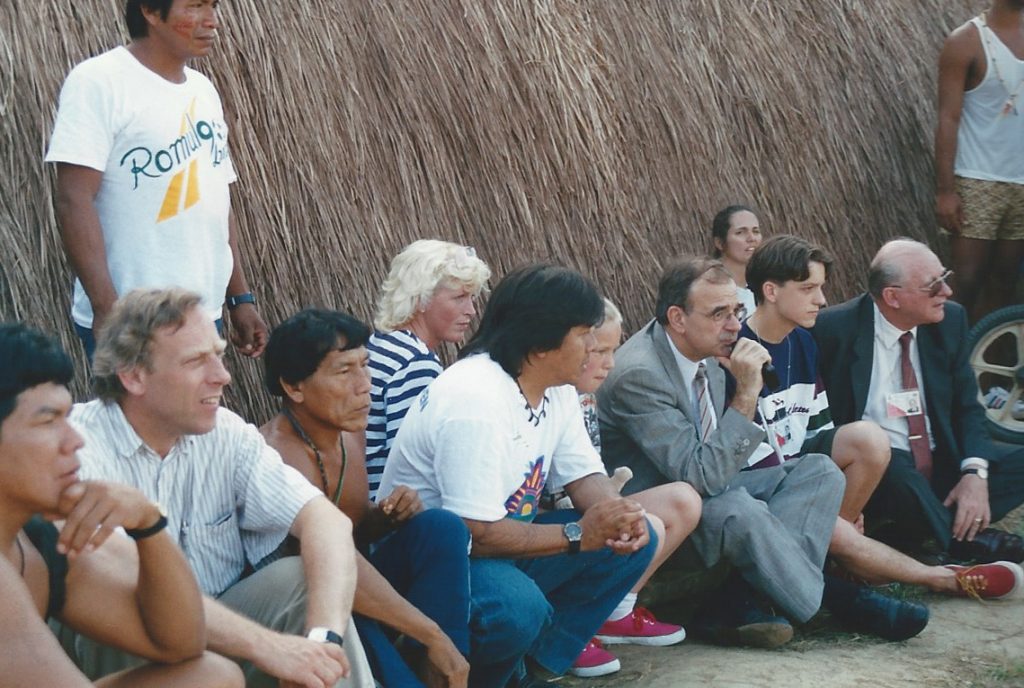 Jan Pronk (in grey suit sitting on the ground), the Dutch Minister of Development Cooperation, visits the Indigenous delegations in Rio, 1992 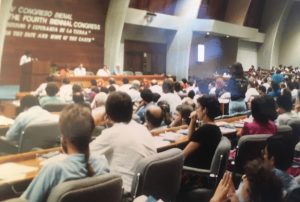 At the Fate and Hope of the Earth Conference, Nicaragua 1989. © Theo van Koolwijk

You mentioned the lack of funding for local NGOs working on environmental challenges in the South. What is Both ENDS’s strategy for addressing this? Has it changed over the years?

We started by creating a donor database and we took the opportunity to expose various development donors to the work of these organisations, which we internally sometimes called ‘donor education’. Right away we developed a relationship with the Global Greengrants Fund in the U.S. and the Environmental Grantmakers Association. Our objective was to meet with funders on behalf of organisations in the South. We organised workshops to raise awareness about the value of small grants funds that can support grassroots environmental organisations.

Daniëlle: What you describe is what we only recently started calling ‘Donor Influencing’. It’s one of the strategies of the Global Alliance for Green and Gender Action (GAGGA), which is led by the Central American Women’s Fund (FCAM) and includes Mama Cash. Only now I realise we have actually been doing this all along! We are still making the case to funders for a different model of funding. Our discourse and the way we think about the ‘donor’ role has shifted a bit within Both ENDS. We have started to take seriously our infrastructure and role in channelling money, since the money is here. We channel the money and guarantee formal control, and we make sure that partners decide how to use it. GAGGA shows clearly this can work the way we once could only envision this. GAGGA is a €40 million partnership with the Dutch Ministry of Foreign Affairs and it is led by FCAM, which is based in Nicaragua. We are their partner.

So developing and pushing for a different funding model – one in which locally rooted, small grants funds play a role – has been an objective throughout Both ENDS’s thirty years. What’s the situation today?

Daniëlle: There is still very little money for grassroots environmental action. But support from the Ministry of Foreign Affairs for GAGGA, which involves women’s funds and environmental funds around the world, is an important success. Other donors are more likely to follow suit now that they see frontrunners like the Netherlands doing it. We’ve also partnered with a private foundation, DOB Ecology, to build evidence about the impact of small grants funds.

What are some key differences from thirty years ago?

Daniëlle: The early issues we worked on are now part of everyday conversation. We’ve succeeded in raising awareness on the relation between poverty, environmental degradation and the way many groups of people are excluded from decision-making processes. We have succeeded in putting issues on the agenda – sustainable development, the need to shift power to the South, to advance gender justice, to be inclusive.

Both ENDS has always been good at being a step ahead. The task before us is changing the way things are done. That’s one of the reasons we focus on financial flows. We chose this as one of our main areas of expertise and influence, because money is a key driver of change.

When I hear Theo talk about the early years, what strikes me is how far we have come. We don’t have to convince or explain to people why we’re doing what we’re doing. In the past few years we have brought a lot of young people on staff and they are totally committed to the Both ENDS vision. There is something to that. It proves that we’re doing the right thing in the right way, as part of a much larger movement that will change the world.