“The thinking was: let’s not waste our time with gender” 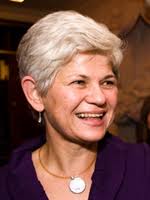 Irene Dankelman was Both ENDS’s first project coordinator when Both ENDS started as a project of IUCN NL. She is now a member of the Advisory board of our JWH Initiative. Irene told us about those early days when she started researching and writing about women and the environment, and about how Both ENDS put this topic on the agenda.

Both ENDS originated from a book you wrote in 1988 called ‘Women and the Environment in the Third World: Alliance for the Future.’ How did a book give birth to an organisation?

In the early 1980s, I was working as the coordinator of IUCN Netherlands in Amsterdam. We had many working groups on international issues in which the Netherlands played a role, such as Tropical Forests, World Conservation Strategy, Antarctica, and North Sea.

In 1985 the Chair of IUCN-NL suggested I work for a while at the Environment Liaison Centre International, in Nairobi, in order to help them organise a series of workshops on women and the environment at the UN Women’s Conference that was being planned there. It was really my first encounter with the work and role of women in the context of the environment. Although, as one of the only women working on environment and development issues in the Netherlands, I had personally experienced how difficult it is in a male dominated sector to have your voice heard and respected.

You didn’t have a background in women and the environment?

I was trained as an ecologist. Up until the late 1970s, it was unusual to link the issues of environment and development, let alone gender and the environment. The issues were all in separate silos. However, there was some eagerness to learn about the links from a professional and policy perspective. The Environment and Development Working Group, in which I participated, worked to push the relationships between environment and development issues to the fore. But the workshop series at the 1985 UN Women’s Conference was really the first time that we took a serious look at the intersection of environment, women’s positions and international development, and brought it into the agenda of the conference. 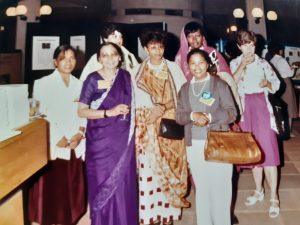 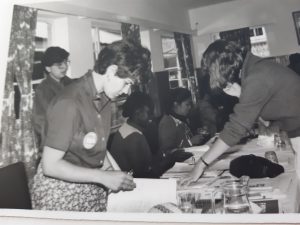 The 1985 UN Women’s Conference was really the first time that we took a serious look at the intersection of environment, women’s positions and international development. © Irene Dankelman

What did you do at the Conference?

We brought together young women leaders from all regions of the world who were putting the role of women in environmental management and resource use at the forefront. It was amazing. The participants included women like Vandana Shiva and Wangari Maathai. At that time they were just starting their work. Only later were they really recognised as global environmental leaders.

I knew we had to collect and share the life stories and work stories of these women and the movements behind them. With support from the Netherlands Ministry of Foreign Affairs, I teamed up with Joan Davidson to write and publish the book, under the auspices of an IUCN-Netherlands project. That’s one half of the story leading up to the founding of Both ENDS.

The other half is that IUCN-NL was asked to find out what environmental organisations in the global South were doing and to see how their work could be supported. The research, done by my colleague Harry van der Wulp, was an inventory of organisations in the South working on environmental issues. In the process of writing the book and the report, we had built a great network and identified priorities and needs from our colleagues around the world. We thought: let’s bring it together into a special project to support organisations in the global South when they need information or funding or support for their advocacy and lobbying.

In your book, you say that ‘to restore and conserve the environment a worldwide reorientation of development towards sustainability is needed at all levels of society’ and that ‘women are among the most important and best experienced actors’ in this regard. It seems this should be obvious by now. Yet we still have to say it today. What do you think has changed since you wrote these words?

Well, at the time, the voices of women weren’t so loud yet. They were there at the local level very strongly, but ignored or invisible at national, regional and international levels. With the book, Joan and I wanted to show that women are actors and have expertise. They are affected by environmental issues in different ways. But they are not just vulnerable, they are not just victims. This is still very relevant. We still tend to start with women’s vulnerabilities, instead of their capabilities.

At that time there was no podium and few voices saying this. Nowadays, there are thousands of voices telling us we have to look at the grassroots, at women. You have to look at the reality of people’s lives, where policies impact them. There is much more noise around these issues, many more words and policies. But still, making it happen on the ground is a challenge.

Another thing that is different now from the 70s and 80s is the level of analysis. Now, we look much more into the context. We’re asking questions like why is there more violence against women when environmental justice is at stake. And there is much more attention to the systems in which and with which we live. The call for transformational change is much stronger.

There is also more focus on an intersectional approach. That was completely absent in those days. We were happy if we could even focus on the role of women and men! What I’ve learned is that working with a gender lens also allows you to look into other social dimensions that are relevant in people’s lives – class, age and ethnicity, for example.

And another thing that’s different: there are millions of women and men, especially young people, calling for environmental justice and women’s rights. There is far more knowledge and expertise. There are now libraries full of information on these issues. 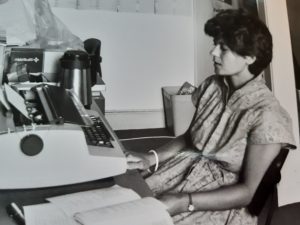 Irene working on her book in the IUCN NL office, around 1988. © Irene Dankelman

Was there resistance along the way?

I felt that, especially in the Netherlands, there was not much willingness among environmental organisations to bring the gender aspect to the forefront. It was not seen as relevant. The thinking was: we have too much work to do on the environment, let’s not waste our time with gender. That has also changed a lot. Now almost every environmental and development organisation has taken up gender and social issues.

In 2005, you supported Both ENDS in developing its first gender policy. What led up to that?

I was a board member around that time. It seemed that the issue of gender had become a bit side-lined within Both ENDS. Even though good work on gender was being done – there were some great people working on it and there was collaboration with women’s organisations – it was not so well defined or explicit in the organisation. Maybe it lacked some coherence and attention.

One lesson we’ve learned is that organisations really need a clear mandate to embed gender justice in their work, and they need people to drive the work. For a period of time that was perhaps a bit lacking at Both ENDS. The gender policy helped make the work more systematic.

It seems that the next big milestone in Both ENDS’s history on ‘women and the environment’ was the inception of the Global Alliance for Green and Gender Action (GAGGA), in 2015.

Yes, Both ENDS’s participation in GAGGA brought all these lines together. I am now involved in the external review of the final evaluation of GAGGA. It’s clear that the programme has strengthened the work on the intersection of women’s rights and environmental justice on many different levels. There are so many lessons on the ground from the GAGGA programme. And Both ENDS and the other GAGGA organisations, FCAM and Mama Cash and their partners, have learned so much from each other.

There is also clearer recognition of how important resources are – both information and financial resources –for women’s and other grassroots organisations to be able to do their work. GAGGA really underscores the importance of an intersectional approach. I see this first GAGGA programme as a starting point and I am so happy that it will continue.**

We are in the midst of a global environmental crisis and a global pandemic. We know that the lives of women are being severely impacted. What is the role of Both ENDS in facing these challenges and looking to the future?

Both ENDS must continue being a critical watchdog and supporter of environmental justice and human rights…for at least thirty more years! It is essential that the lobbying and advocacy work with partners in the global South continues. That’s why GAGGA is so important. It is so important to continue bringing people’s voices – women’s voices – to the forefront, and ensure that they are being heard. 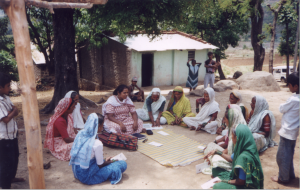 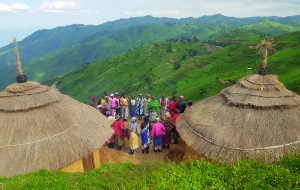 Sengwer women discuss the building of the Cultural Centre, Embobut, Kenya. Also in the 20th century, it is still necessary to organise women-only spaces.*** © Milka Chepkorir

*In 1994 Joke Waller-Hunter became the first UN Director for the United Nations Commission on Sustainable Development. She eventually became Executive Secretary of the UN Framework Convention on Climate Change. Waller-Hunter passed away in 2005, leaving her estate to Both ENDS. With her legacy, Both ENDS created the Joke Waller-Hunter Initiative, which supports education, experience and training for young environmental leaders in developing countries.

**The GAGGA Alliance was recently awarded a second five-year strategic partnership with the Ministry of Foreign Affairs, 2021-2025.

***Also see the publication “Embedding gender justice in environmental action: where to start?“, Both ENDS 2020.