The history of Both ENDS’s work on financial flows can be traced back to social movements of the 1980s and 1990s. At the time, activists around the globe converged during the Annual Meetings and Conferences of the world’s most powerful international financial institutions (IFIs), the International Monetary Fund (IMF) and the World Bank, to condemn their harmful lending practices and policies of forced austerity. IFIs, both then and now, typically invest huge amounts of public funding in large infrastructure projects, like hydroelectric dams, which cause severe social and environmental devastation.

A key focus of Both ENDS’s attention at the time was the Save the Narmada Movement, co-founded by social activist Medha Patkar. The movement aimed to protect the people and ecosystems of the Narmada River, in central India, from a massive World Bank-financed dam project. The dam project threatened to displace some one million people while causing devastating and irreversible ecological impacts. The project was emblematic of the unsustainable development model.

Hunger strikes and mass demonstrations drew the world’s attention to the movement’s cause. Both ENDS joined the voices of those demanding that the World Bank review the Narmada dam project and fundamentally rethink its lending policies. Both ENDS raised public awareness in the Netherlands about the issue and advocated for action by the Dutch member of the World Bank’s Board of Directors. Despite being a small country, the Netherlands plays an outsized role in World Bank decision-making: it is the designated representative of 13 countries and, as a relatively significant shareholder, has significant voting power. 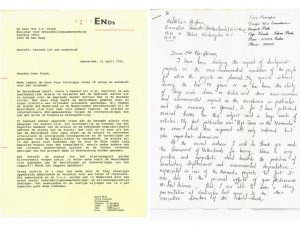 Letters from Both ENDS to dutch Minister Pronk and from Both ENDS’s partner Mr. Paranjepye to the Dutch representative at the World Bank, Mrs. Herfkens 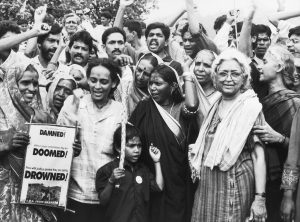 Local protests against the Narmada dams in India. Date and place unknown.

In response to concerns raised in the early 1980s, the Bank had already adopted some social and environmental safeguards. But projects like the Narmada dam made evident that such policies were not being implemented. Yet there was no recourse for communities whose rights had been violated. Multilateral financial institutions were considered above the law and there was no alternative mechanism – beyond the courts – for people to pursue their grievances and ensure the World Bank’s accountability.

The Save the Narmada Movement and allies like Both ENDS succeeded in generating the pressure needed for change. In 1991, for the first time ever, the World Bank commissioned an independent review to examine the impact of the Narmada dam project. The subsequent report confirmed serious flaws in the project, including lack of compliance with both the World Bank’s and India’s human rights and environmental standards.

The report buoyed the cause of the Save the Narmada Movement and eventually led the World Bank to discontinue its support for the dam. In 1993, on the heels of the Narmada divestment decision, the World Bank Inspection Panel was established. The Inspection Panel offered a way for people and communities who feel they will be or have been adversely affected by a World Bank-funded project to file a complaint.

While by no means perfect, the Inspection Panel served as an important model. In the years that followed, Both ENDS and allies worldwide pushed for establishment of similar, yet stronger, independent accountability mechanisms among all development finance institutions. The work of Both ENDS contributed to establishment of accountability mechanisms by the Dutch development bank FMO, the European Investment Bank and the Asian Infrastructure Investment Bank‎, among others.

Of course, prevention is better than cure. The Narmada dam case exposed the World Bank’s failure to implement its own social and environmental safeguards. Strong implementation of safeguards should have prevented the lending decision in the first place. For Both ENDS, changing IFI lending policies and ensuring implementation of strong safeguards was always the main objective. Both ENDS pressed banks to follow the lead of the frontrunners and commit to ‘upward harmonisation’ of safeguards. Safeguards for women’s rights is a good example. Both ENDS drew attention to this often-neglected issue, helping ensure that women’s rights were explicitly addressed in the safeguard policies of several IFIs. While policy work is often abstract, for Both ENDS it always comes down to the impact on the ground, to the effect on the lives of real people. That principle can be seen in the recent work of partners Lumière Synergie pour le Développement and WoMin. With support of Both ENDS, the organisations have had some success in holding the African Development Bank accountable for its gender policy, thereby preserving access of some 1,000 fisherwomen in Senegal to their fish drying grounds.

Both ENDS is one of few organisations in Europe with thirty years’ of continual experience on international financial flows. Its support and expertise has been unmissable in regional and global networks dedicated to the issue, including the NGO Forum on ADB, ECA Watch, the Coalition of African Civil Society Organisations on the African Development Bank, the European Counterbalance network and the International Accountability Working Group. Both ENDS has co-founded, financially supported or served in leadership positions in all of these networks.

The imbalance of power between affected people and international financial institutions remains enormous. Despite years of effort, the number of major successes – harmful projects prevented or compensation for complainants – have been rare. Yet thanks to thirty years of effort, the groundwork has been laid. The basic foundation to ensure accountability of international financial institutions is in place. The infrastructure for civil society cooperation is solid. As the Covid-19 pandemic reminds the world of the value and importance of public institutions and finance, positive change could be on the horizon. When the political and public will coincide in democratic decision-making over public finance – a goal toward which Both ENDS will continue to work – inclusive, sustainable development will be within reach. 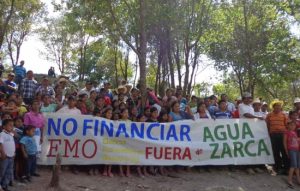 Community members of Rio Blanco, Honduras, protest against a dam partly financed by Dutch development bank FMO. Indigenous leader Berta Cáceres was murdered in the conflict. After a lot of pressure and dialogue FMO divested from the project and adapted its safeguards. 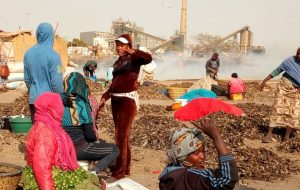 Women dry fish on the beach against the background of the coal plant near Sendou. © Aly Sagne